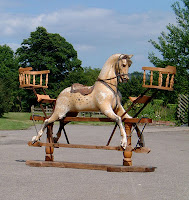 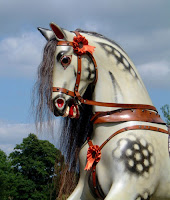 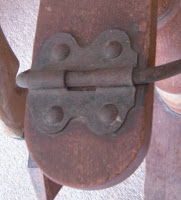 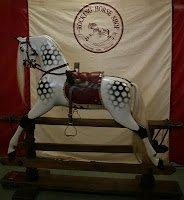 " An excellent course! I was amazed at how well my "head" turned out, not having carved anything at all before. I would highly recommend this course. All members of the Rocking Horse Shop staff were very friendly and extremely helpful. "

" A cracking course. The team build confidence in both your woodcarving skills but also your artistic interpretation - by the end your horse's head may not look exactly like one of his but it will be pretty darn good! "

" I have to agree with all the positive reviews already made on the 3 day workshop on carving a rocking horse head. I experienced a very well organised course on learning the techniques for using the tools on solid wood without messing up the head right away, leading on to shaping the head as you would like. Just follow what is demonstrated step by step and you will end up with a very professional looking horse’s head and a good working knowledge of how to use the tools. I had already assembled the Large Rocky and carved the body but I needed some practise on a head. This was just what I needed. I am now full of enthusiasm to complete the Large Rocky. Most enjoyable, full of fun and a fabulous active holiday. There were six of us on the course and there were six good looking heads after only three days. I could not recommend this workshop more highly. The only negative is that I had to go home afterwards. "

" I just want to say how wonderful our new rocking horse that you delivered last week is.  It really is a fantastic work of art and I wish to express my sincere thanks to all who worked on it.  It really did exceed all my expectations.  So a massive thank you to everyone.   "

" Every horse is a hand-crafted individual. Ready-to-ride horses are available from stock, or you can commission a 'Special', made to your own preferred size and style. Horses can be shipped to any destination. "

" What a great way to spend 3 days! It was with some trepidation that I arrived at The Rocking Horse Shop to become a student at the 'Carve a Head' course. I had minimal experience with woodwork having made some small wooden toys, but had never tried my hand at carving. The first thing to be said is how friendly everyone was, only 2 mins after entering the premises I had a cup of coffee in my hand. You were never rushed, everything from carving techniques to use of special power tools was very well explained. All 5 students ended up with rocking horse heads that we could be proud of. We had learned the basics of a great craft and had some fun along the way. I have the rest of the timber pack and am now looking forward to completing the whole rocking horse.?If you have ever considered trying your hand at carving or making a complete rocking horse, then put it off no longer, this is the course for you. I can't recommend it highly enough. "

" Highly recommended. I'd never done any woodcarving before and managed to leave with something that looked like a rocking horse head! Very relaxed and friendly atmosphere on the course and I liked the format of demonstrating each stage before letting us loose to have a go ourselves. He provided as much or as little help as requested and at no stage was I ever made to feel like I was going to fail. I am determined to complete the full horse and have in fact now purchased the materials to do so. Go on, give it a go!!! "

" As a competent hobby woodworker, but with no woodcarving experience. Miraculously, at the end of three days, I found myself in possession of a very presentable carved head, greatly exceeding my expectations. The team were able to give just the right level of help or advice to a pretty varied bunch of students. Everyone at the Rocking Horse Shop was very pleasant and helpful. Well worth travelling all the way from Kent to Yorkshire for the experience. "

" This is just to say how delighted I am with our restored rocking horse which arrived safely yesterday.  The handsome horse seems a far cry from the poorly horse we dropped off in May and it is now in pride of place in the dining room awaiting introduction to the grandchildren next week. It has been a pleasure to deal with your enthusiastic team and the result is great. It arrived on time as agreed and on budget. Rosemary Burke "

" We love the rocking horse - it is absolutely as we wanted it. Thank you!  "

" I just wanted to drop you a note to thank you for the warm welcome I received last week on the Head Carving Course. It was a genuine pleasure to spend time in the work shop with a highly skilled and creative tutor.  The 3 days provided ample opportunity to share this enthusiasm and to learn from a master craftsman. Thank you again for your support, guidance and timely advice. I feel equipped and inspired to complete my very own medium rocking horse which I am sure will become a munched loved addition to our family.  "

" I am writing to express my appreciation for the great customer service I have received from The Rocking Horse shop during making a Large Rocky Rocking Horse. On the three occasions I either phoned or emailed I was given helpful and friendly advise which was followed by a speedy delivery.  "

" Its hard to find new words to describe this course after looking at all the past reviews. Lets just say it was everything and more that I'd hoped but with great Yorkshire Hospitality thrown in. What a team they have down there. With very little carving experience I came away with a head -- and the rest of the kit to build the whole horse at home. Went on the course at the end of June and I have a completed horse sitting in my conservatory today 2 months later. Support from the Team has been great throughout. Believe me they wont leave you out there on your own if you need assistance. One complaint -- they don't tell you that this is very very addictive. One problem -- which horse to do next. If you are dithering about going on this course, don't, just book it   "

" Had an great time and learned quite a bit in the three days I was there and it was my first course on carving and I will def think of doing something else again soonish lol. The team made me very welcome and have no hesitations what so ever in recommending this course. "

" For me it was a first working with sharp chisels and wood but within the first hour of the course we were given enough confindence to begin to shape our horses heads and by the end of the three days we all came away with heads we could hold up with pride. The whole course was well planned and we never were never made to feel the beginers we were. I now have an almost complete horse getting ready for his saddle, main and tail after countless hours of fun and head scratching. Try it! "