A Brief History of The Rocking Horse Shop

Anthony Dew designed and made his first wooden rocking horse back in 1976. It was just him and his wife then, working out of the garage of their house under the company name ‘The Rocking Horse Winner’. In 1984 they bought an old butcher's shop in Holme upon Spalding Moor and ‘The Rocking Horse Shop’ was born.

That same year Anthony’s book ‘Making Rocking Horses’ was published by David & Charles, along with designs for a Large traditional carved rocking-horse, a Small on bows and a Toddler’s rocker. Soon the company had two employees and were selling ten different plans with Timber packs and all the accessories.

In 1991 the company moved to Fangfoss in the East Riding of Yorkshire and built larger, purpose-designed rocking-horse workshops and showroom. By 2011 we were making and restoring hundreds of rocking-horses, as well as selling plans and accessories, and we made ‘Bigger Bertie’. At 28 feet long and nearly 15 feet high, Bigger Berte was the World’s Largest Rocking Horse and attracted widespread media attention. 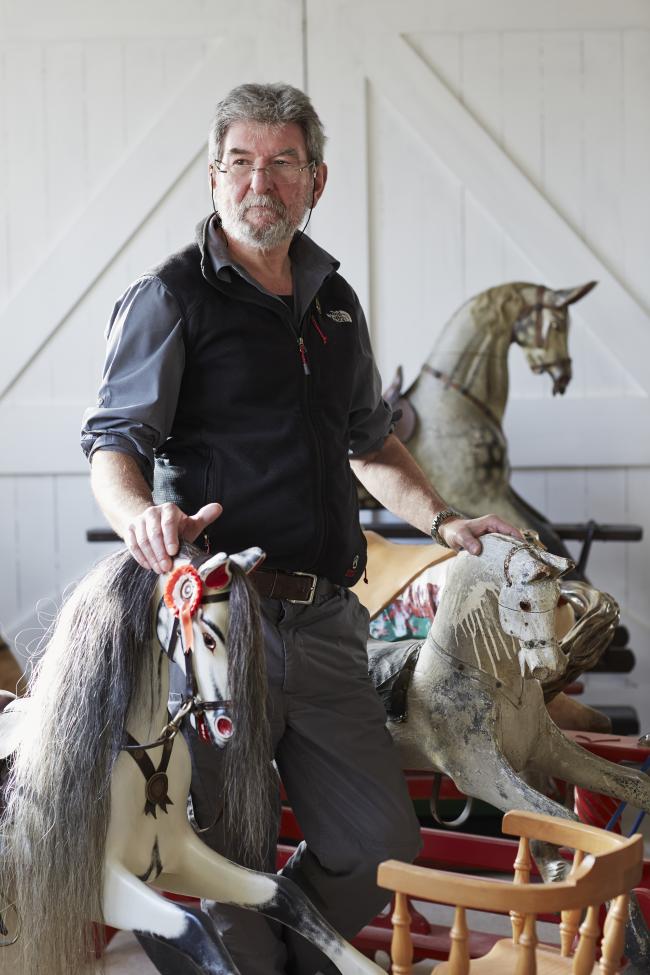 As part of the company's Millennium celebrations, The Guild of Rocking Horse Makers was conceived as a group for like-minded people to promote and encourage the traditional craft of rocking-horse making. The guild still runs today, exchanging information and connecting members across the globe.

The Rocking Horse Shop is family run and continues to build on the successes of the past. As well as hand-crafted finished rocking-horses, we publish a wide range of plans, from weekend projects to fully-carved rocking-horses, and the company continues to grow from strength to strength. The core of the business remains firmly with traditional hand-skills, but we do embrace new technologies where appropriate.

Anthony continues to be a good friend to the business, providing his many years of experience to support the team as we look towards our Golden Jubilee in 2026. He is currently working on a new revised edition of his comprehensive how-to-do-it book ‘The Complete Rocking Horse Maker’ as well as a book that goes deep and personal into the history of rocking-horses and The Rocking Horse Shop. Look out for these two new books, scheduled for publication in Autumn 2021.

I just wanted to drop you a note to thank you for the warm welcome I received last week on the Head Carving Course. It was a genuine pleasure to spend time in the work shop with a highly skilled and creative tutor. The 3 days provided ample opportunity to share this enthusiasm and to learn from a master craftsman. Thank you again for your support, guidance and timely advice. I feel equipped and inspired to complete my very own medium rocking horse which I am sure will become a munched loved addition to our family.

This is just to say how delighted I am with our restored rocking horse which arrived safely yesterday.  The handsome horse seems a far cry from the poorly horse we dropped off in May and it is now in pride of place in the dining room awaiting introduction to the grandchildren next week.

It has been a pleasure to deal with your enthusiastic team and the result is great. It arrived on time as agreed and on budget.

I have to agree with all the positive reviews already made on the 3 day workshop on carving a rocking horse head. I experienced a very well organised course on learning the techniques for using the tools on solid wood without messing up the head right away, leading on to shaping the head as you would like. Just follow what is demonstrated step by step and you will end up with a very professional looking horse’s head and a good working knowledge of how to use the tools. I had already assembled the Large Rocky and carved the body but I needed some practise on a head. This was just what I needed. I am now full of enthusiasm to complete the Large Rocky. Most enjoyable, full of fun and a fabulous active holiday. There were six of us on the course and there were six good looking heads after only three days. I could not recommend this workshop more highly. The only negative is that I had to go home afterwards.

I just want to say how wonderful our new rocking horse that you delivered last week is.  It really is a fantastic work of art and I wish to express my sincere thanks to all who worked on it.  It really did exceed all my expectations.  So a massive thank you to everyone.

I am writing to express my appreciation for the great customer service I have received from The Rocking Horse shop during making a Large Rocky Rocking Horse. On the three occasions I either phoned or emailed I was given helpful and friendly advice which was followed by a speedy delivery.

What a great way to spend 3 days! It was with some trepidation that I arrived at The Rocking Horse Shop to become a student at the 'Carve a Head' course. I had minimal experience with woodwork having made some small wooden toys, but had never tried my hand at carving. The first thing to be said is how friendly everyone was, only 2 mins after entering the premises I had a cup of coffee in my hand.

You were never rushed, everything from carving techniques to use of special power tools was very well explained. All 5 students ended up with rocking horse heads that we could be proud of. We had learned the basics of a great craft and had some fun along the way. I have the rest of the timber pack and am now looking forward to completing the whole rocking horse.?If you have ever considered trying your hand at carving or making a complete rocking horse, then put it off no longer, this is the course for you. I can't recommend it highly enough.

We love the rocking horse - it is absolutely as we wanted it. Thank you!

Thank you for the rocking horse received. Packed extremely well. Exactly as ordered. Real leather saddle and straps looks absolutely beautiful. Delighted with the product.
Full marks to the company, for the way the order the has been handled in the time specified. Would recommend this family run company.
Thank you so much.

Would highly recommend the Rocking Horse shop to anyone thinking of buying a horse. Extremely impressed with the high quality horse and your service. Thank you so much.