Here is an example of a Lines Bros Rocking Horse. At their peak , Lines Bros were the main competitors to Ayres (who are widely regarding as the finest rocking horse makers), in the early 1900’s,

As you can see, the horse had been repainted and lost all of its original hair and leatherwork. Once it was finished it had undergone quite a transformation before being returned home to another delighted owner. Although many aspects are not original, it is ready for another 100 years of use by many future generations. 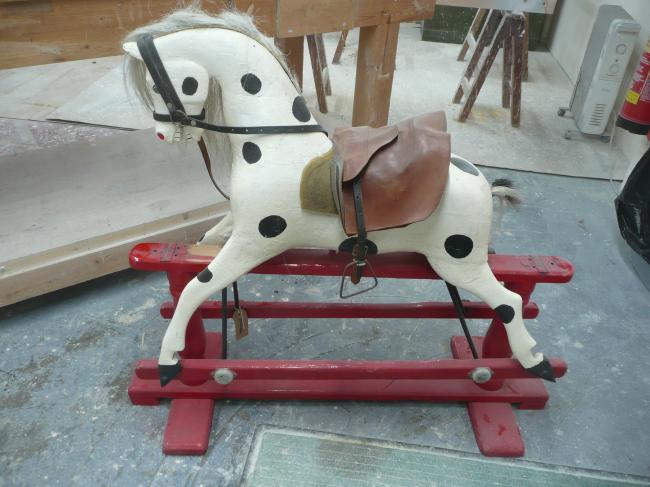 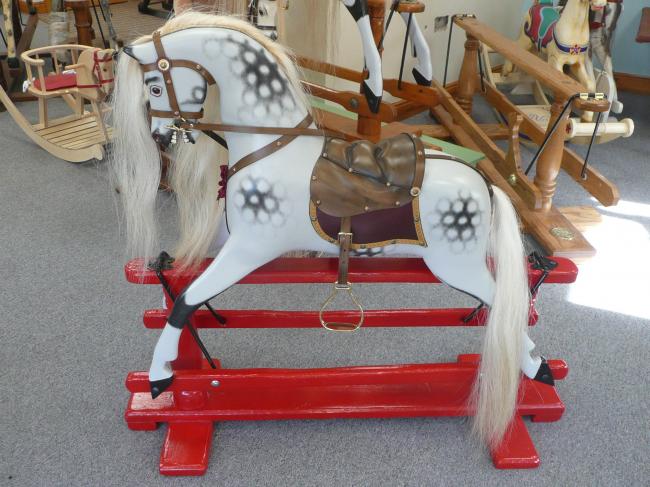 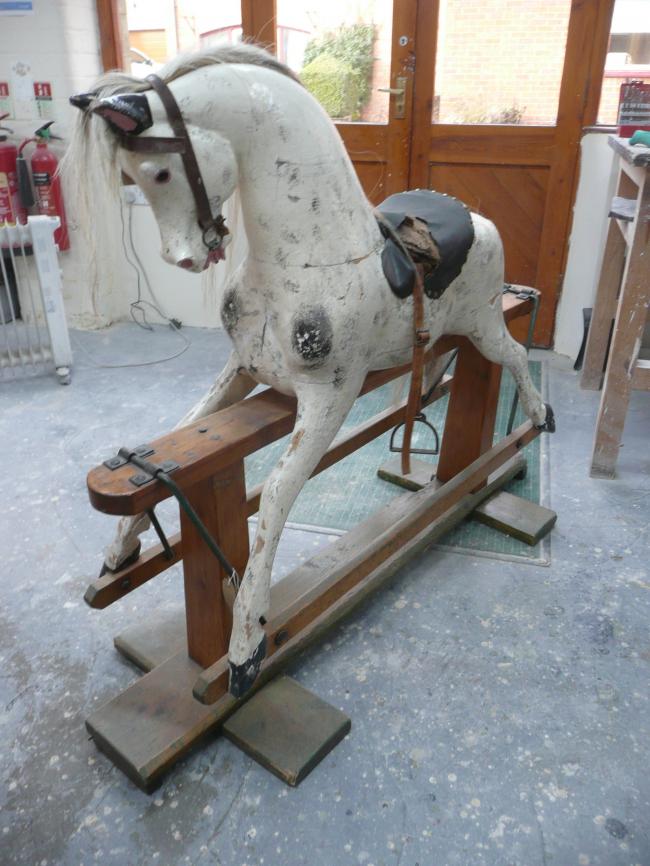 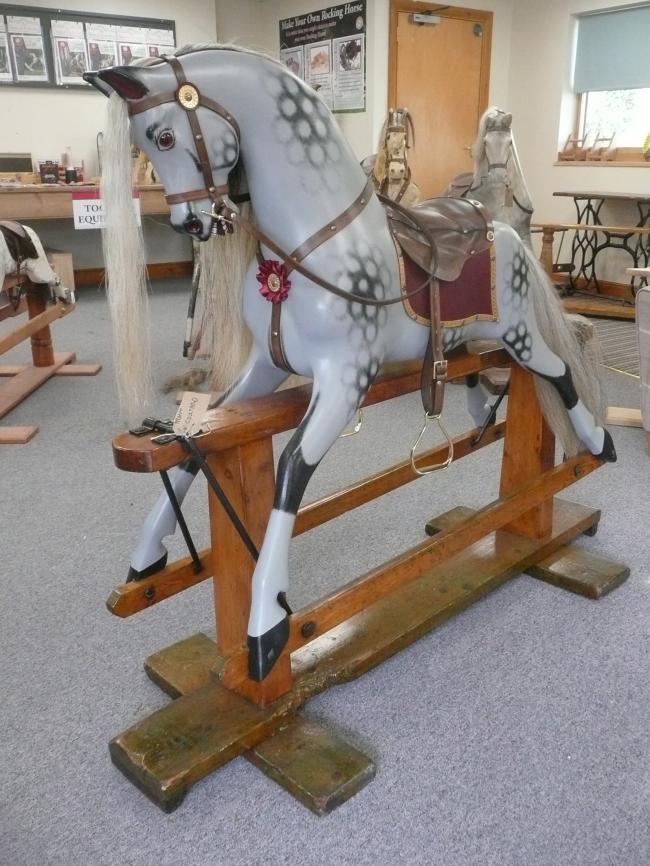 This example shows a Baby Carriages Rocking Horse, a mid-range antique horse from the early 1900’s. The company was previous known as Hill & Harrison and they traded from Liverpool. The distinguishing rectangular posts (similar to those used by Collinsons who, coincidentally also traded out of Liverpool) and tucked in head bears many similarity to an Ayres design are just some of their outstanding features.

This horse was bought to us in poor condition, missing most of its leatherwork and needing some serious repainting. Our first job was to stirip the horse back to the bare wood then to make some repairs made to the body work before being repainted and new traditional saddle and hair was fitted.

The original Lines company traded in the period circa 1880 to 1931 variously as G&J Lines, the initials referring to the two brothers, George and Joseph. They operated a number of small factories in North London, making a wide range of toys. In 1927 they became Triang and for a while became the world's largest toy company.

This medium Lines SportiBoy was a popular and well-made model in the 1920’s. It came to us missing its original paint work and distinguishing removable saddle. After some minor repairs to the woodwork, new gesso, paint and bespoke leatherwork and hair, the horse looks as good as it did 100 years ago and was returned home to an overjoyed owner. 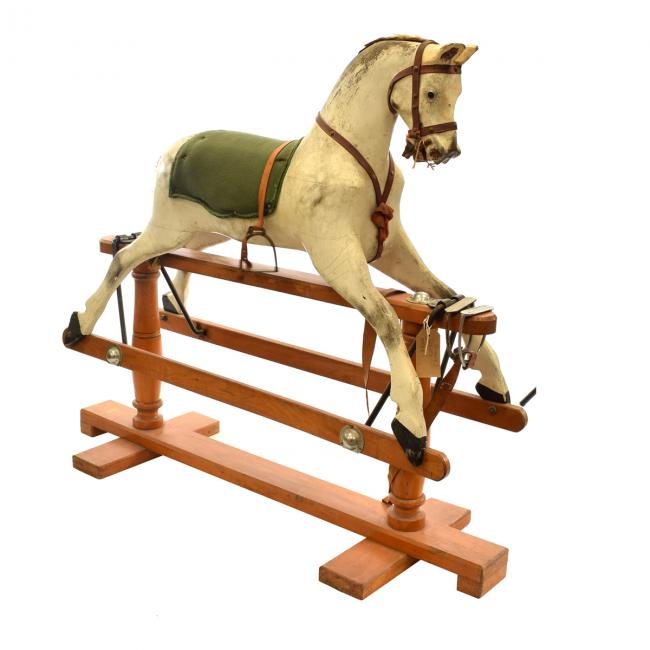 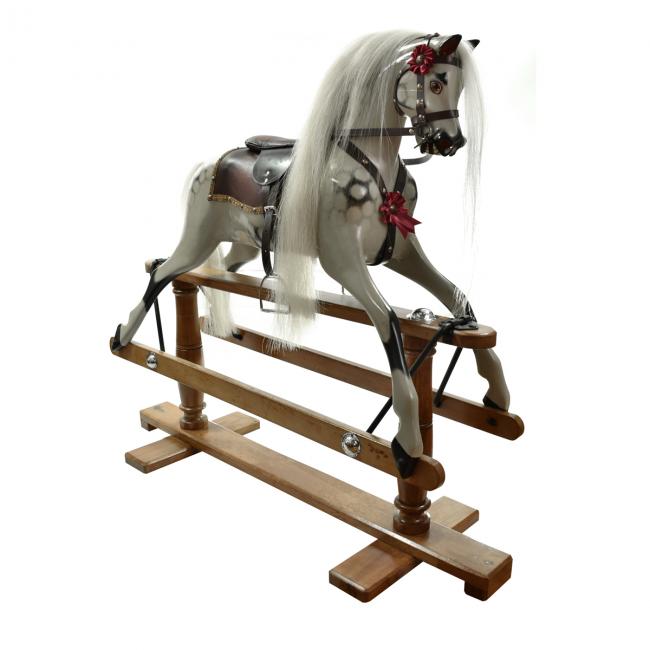 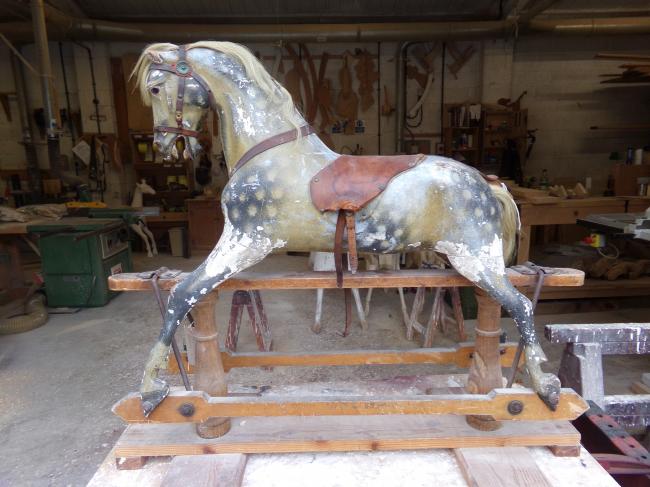 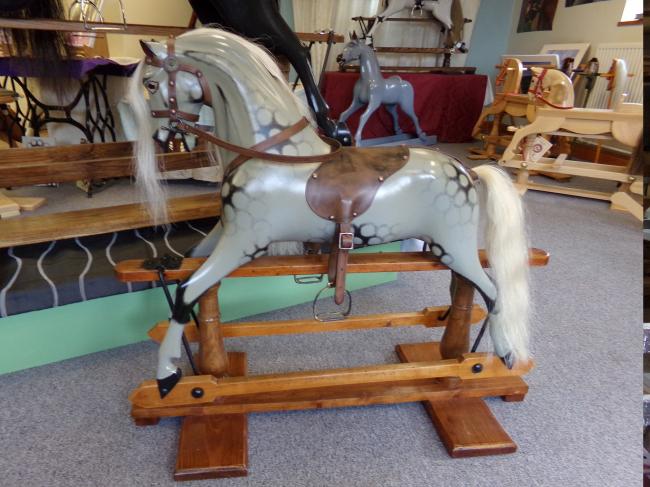 Although the name of Frederick Henry Ayres is very well known in the Rocking Horse world, it was first synonymous with high quality sporting goods: such as billiards, croquet and tennis, together with board games. From the mid 1800’s,  the company were based in London and were renowned for making the finest of Rocking Horses. Although the horse was brought to us in original condition, the owner opted to fully restore the horse, with new paint and leatherwork.

One of out most popular horses to repair and probably the longest-established English rocking horse maker, J. Collinson traces its roots back to Liverpool in 1836. The more modern Collinsons are quite crude in their carving with less flaring of the nostrils, metal studs for the eyes and corduroy/leatherette saddles which all made for quicker / cheaper production in the factory. A hardboard diamond was often fitted to the top rail to hide the nails used to assemble the stand. 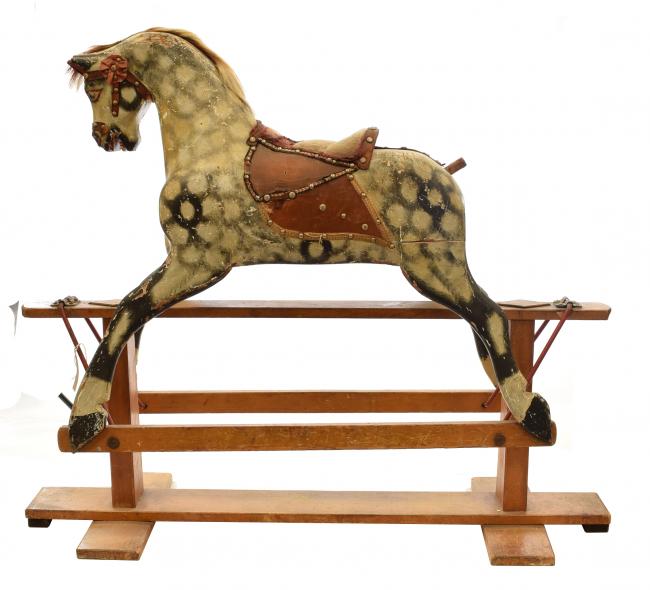 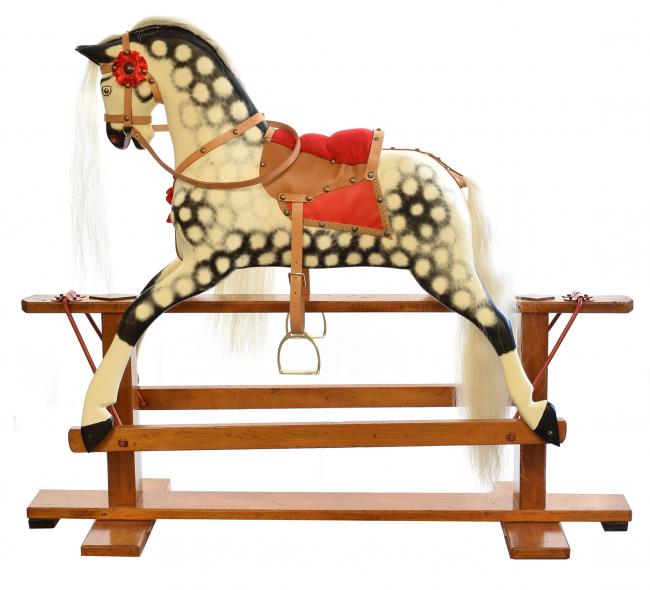 If you have a battered & forlorn old rocking horse, before you do anything to it please think carefully. Sometimes it is wisest to do nothing at all. Sometimes a little judicious touching up of leather or hair replacement is all that is called for and sometimes a full renovation is required. In our opinion old rocking horses should not be restored or renovated unless (a) they have been badly repaired and/or repainted in the past, or (b) are too battered to be safe for a child to ride (& even then it may be preferable to keep the old horse in its original battered condition as a museum piece, & buy a new one for the children to ride!).

I just wanted to drop you a note to thank you for the warm welcome I received last week on the Head Carving Course. It was a genuine pleasure to spend time in the work shop with a highly skilled and creative tutor. The 3 days provided ample opportunity to share this enthusiasm and to learn from a master craftsman. Thank you again for your support, guidance and timely advice. I feel equipped and inspired to complete my very own medium rocking horse which I am sure will become a munched loved addition to our family.

This is just to say how delighted I am with our restored rocking horse which arrived safely yesterday.  The handsome horse seems a far cry from the poorly horse we dropped off in May and it is now in pride of place in the dining room awaiting introduction to the grandchildren next week.

It has been a pleasure to deal with your enthusiastic team and the result is great. It arrived on time as agreed and on budget.

I have to agree with all the positive reviews already made on the 3 day workshop on carving a rocking horse head. I experienced a very well organised course on learning the techniques for using the tools on solid wood without messing up the head right away, leading on to shaping the head as you would like. Just follow what is demonstrated step by step and you will end up with a very professional looking horse’s head and a good working knowledge of how to use the tools. I had already assembled the Large Rocky and carved the body but I needed some practise on a head. This was just what I needed. I am now full of enthusiasm to complete the Large Rocky. Most enjoyable, full of fun and a fabulous active holiday. There were six of us on the course and there were six good looking heads after only three days. I could not recommend this workshop more highly. The only negative is that I had to go home afterwards.

I just want to say how wonderful our new rocking horse that you delivered last week is.  It really is a fantastic work of art and I wish to express my sincere thanks to all who worked on it.  It really did exceed all my expectations.  So a massive thank you to everyone.

I am writing to express my appreciation for the great customer service I have received from The Rocking Horse shop during making a Large Rocky Rocking Horse. On the three occasions I either phoned or emailed I was given helpful and friendly advise which was followed by a speedy delivery.

What a great way to spend 3 days! It was with some trepidation that I arrived at The Rocking Horse Shop to become a student at the 'Carve a Head' course. I had minimal experience with woodwork having made some small wooden toys, but had never tried my hand at carving. The first thing to be said is how friendly everyone was, only 2 mins after entering the premises I had a cup of coffee in my hand.

You were never rushed, everything from carving techniques to use of special power tools was very well explained. All 5 students ended up with rocking horse heads that we could be proud of. We had learned the basics of a great craft and had some fun along the way. I have the rest of the timber pack and am now looking forward to completing the whole rocking horse.?If you have ever considered trying your hand at carving or making a complete rocking horse, then put it off no longer, this is the course for you. I can't recommend it highly enough.

We love the rocking horse - it is absolutely as we wanted it. Thank you!

Thank you for the rocking horse received. Packed extremely well. Exactly as ordered. Real leather saddle and straps looks absolutely beautiful. Delighted with the product.
Full marks to the company, for the way the order the has been handled in the time specified. Would recommend this family run company.
Thank you so much.

Would highly recommend the Rocking Horse shop to anyone thinking of buying a horse. Extremely impressed with the high quality horse and your service. Thank you so much.